The way the NHL regular season is shaping up, it’s a good bet that five of the seven Canadian teams could reach the playoffs this spring.

That’s the kind of playoff CanCon that Rogers was hoping for when it signed a massive $5.2-billion US, 12-year deal to land the league’s broadcasting rights in 2013, a move that gave Sportsnet an immediate edge in its long-running rivalry with TSN.

After some early challenges, Rogers is set to get more bang for its buck as more teams from north of the border move into contention.

“Rogers gambled that Canadian teams would be coming back,” said sports marketing expert Richard Powers, an associate professor at the University of Toronto’s Rotman School of Management. “When they signed that deal, Canadian teams were really in a lull.

“They have come back.”

The partnership between the media giant and the league was announced in November 2013 and the deal kicked in for the 2014-15 season. Five Canadian teams made the playoffs that spring but three crashed out in the first round and the others were eliminated in Round 2.

The worst-case scenario for Rogers arrived a year later as Canadian teams were shut out of the post-season. Five teams made the cut in 2017 but three were eliminated in the opening round, with the Ottawa Senators making it to the conference final.

Last spring, only Winnipeg and Toronto reached the post-season. The Maple Leafs made a first-round exit while the Jets were eliminated in the conference final.

“The length of that deal was extraordinary and the amount that they paid was extraordinary,” Powers said. “I think they’re actually leveraging it quite well. I don’t know what else they can do. Everybody knows it’s Rogers.”

Sportsnet, which is part of Rogers Media, bills itself as Canada’s No. 1 sports media brand. The network’s main rival since its inception in 1998 has been TSN, which calls itself Canada’s sports leader, and is a division of Bell Media.

The sports media landscape had a much different look two decades ago. Nowadays, each network boasts multiple feeds, online and mobile viewing options, and an impressive lineup of marquee international properties.

In addition to hockey, some of Sportsnet’s domestic offerings include the Toronto Blue Jays/MLB (the Blue Jays are owned by Rogers), the Grand Slam of Curling and the Canadian Hockey League. TSN’s lineup includes some regional NHL games along with the Canadian Football League, world junior hockey championship and the Season of Champions curling events.

“I think (the rivalry is) great for consumers and for viewers,” Powers said. “It keeps both teams, at each network, it keeps their eyes on the ball so to speak, no pun intended. They are looking for ways to beat the competition … so I think the ultimate winners are the fans and the viewers.”

Two of the more notable contracts — Sportsnet’s MLB deal and TSN’s deal with the CFL — run through 2021. One deal that is up in just over a year is TSN’s contract with Curling Canada for the Season of Champions events.

It will be worth watching to see if Sportsnet doubles down on a ratings winner like curling by trying to land the package, which includes the Tim Hortons Brier, Scotties Tournament of Hearts and world championships. 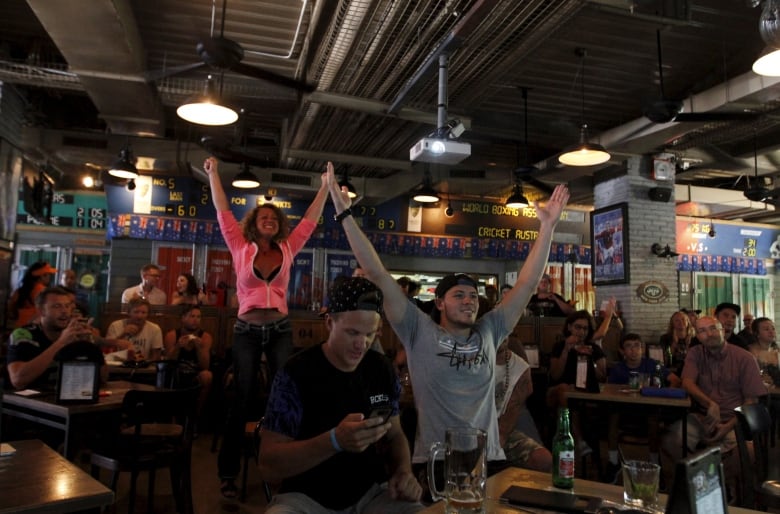 Fans react while watching the NFL’s Super Bowl, one of the biggest television events of the year. (Roni Bintang/Reuters)

“Sometimes you acquire rights just to sort of put a stake in the ground in terms of the bigger picture,” said Vancouver-based marketing communications executive Tom Mayenknecht. “That’s where I would really start. The bigger picture is that we probably have the most competitive sports television landscape that we’ve ever had in this country.”

However, one big question mark remains as Sportsnet has yet to name a successor for president Scott Moore. He left the company in October, with Rogers Media president Rick Brace currently handling the position on an interim basis.

Moore has said that if Sportsnet hadn’t landed the NHL rights, the network would have become a “regional, inconsequential player.” He added the deal has paid for itself each year because Sportsnet can enjoy the financial returns that come with it.

“If you’re going to buy sports media in this country now, you’re going to call us first,” Moore told The Canadian Press last October. “It used to be all the big deals went to TSN and we got what was left over.”

In addition to traditional broadcasters, subscription video streaming services like DAZN could make more of a dent on the Canadian sporting scene over the coming years.

The hammer comes with hockey though, and the Canadian sports media landscape could have a much different look when talks begin on the next NHL deal.

The current contract expires in 2026.

“TSN and Sportsnet are no longer the only players within,” said Mayenknecht, who hosts a sports business show that airs on TSN Radio and other stations around the country. “They’re the lead players for sure, but they’re part of a much more organic, changing landscape.”