By: Major News Channel
In: News, News/Canada/London
With: 0 Comments

A young nurse who worked at a Woodstock care home with Elizabeth Wettlaufer had a feeling things weren’t quite right with the older woman.

A public inquiry into long-term care heard today from Robyn Laycock, who worked with Wettlaufer at Caressant Care in Woodstock, Ont., for a brief time — from  2010 to 2013, with an eight-month maternity leave within that time.

Before Laycock started working at the home, Wettlaufer had already killed two residents by injecting them with massive amounts of insulin. But no one suspected the nurse was intentionally harming patients.

Laycock didn’t get along with Wettlaufer. She was a young grad and Wettlaufer, an experienced nurse, would “throw her weight around.”

In 2010, a month after being hired, Laycock was looking after a palliative patient. She testified that Wettlaufer suggested the patient needed some Dilaudid, a heavy duty pain killer. But the patient appeared to be sleeping peacefully and not in pain, so Laycock disagreed.

“Bethe took it upon herself to administer the medication,” Laycock said at the Elgin County courthouse in St. Thomas, Ont., during her testimony.

Sometime in early 2012, Laycock came upon Wettlaufer standing over another palliative patient, telling him or her “it’s OK to let go, it’s OK to pass on, their body was tired, their family would understand, their journey was done,” Layock testified.

“I was livid,” Laycock said. “I didn’t think it was her place. 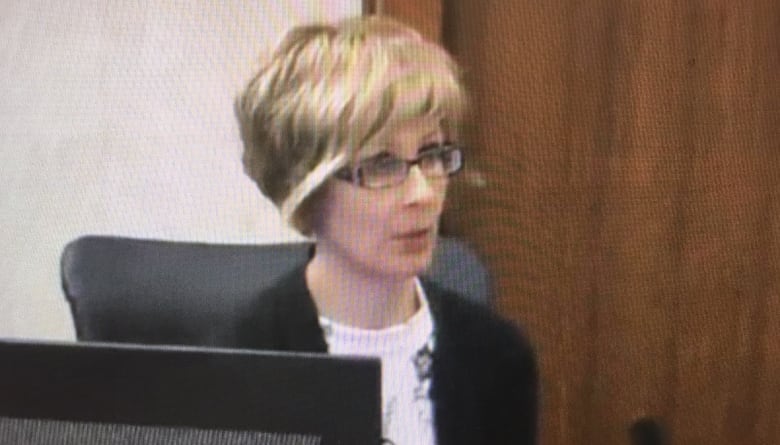 Diane Beauregard worked with Elizabeth Wettlaufer at Telfer Place in Paris, Ont., where Wettlaufer tried to kill a patient with an insulin overdose. (Kate Dubinski/CBC )

“It just kind of reminded me of movies where the Grim Reaper was standing over a body, waiting for the soul.”

Wettlaufer, who Laycock nicknamed Angel of Death, had actually attended a Halloween Party at Caressant Care dressed as the Grim Reaper.

Laycock testified that she started looking over the death registry, where Caressant Care recorded resident deaths, to see if she could find  a pattern to the deaths, or if there were more deaths when Wettlaufer worked.

“I was wondering if there was an increase in patients that were passing on her shifts. I didn’t have any particular proof. I kept going back to the death registry,” Laycock said.

One particular month stood out to Laycock, but she couldn’t remember when that was. One of the lawyers for a group of victims’ families suggested it was October and November of 2011, when Wettlaufer killed three residents within 25 days. But Laycock said she couldn’t be sure. The nurse who pleaded guilty to killing eight seniors with fatal doses of insulin is shown here in a taped confession in October 2016. 0:33

She said it wasn’t uncommon for residents to die in the evening or overnight, and she eventually dismissed her suspicions as “silly.”

Over her career at Caressant Care, Wettlaufer killed seven people. She went on to kill another in a nursing home in London, Ont.

She tried to kill or harm six others, including a woman from Telfer Place in Paris, Ont., who survived and who might testify at the inquiry.

‘Was there something I missed?’

Wettlaufer was hired through a temp agency to work at Telfer Place in 2016, after abruptly quitting her job at Meadow Park Long-Term Care in London, Ont., the day a large amount of painkillers went missing.

Nurse Diane Beauregard also testified at the inquiry on Monday.

She’s worked at Telfer Place since 1999 and said the home had a very difficult time recruiting nurses because work there was physically demanding and stressful.

“You never get to take your breaks,” she said.

At the time Wettlaufer was placed there, one registered nurse was responsible for 45 patients in the long-term care part of the Telfer Place facility. The nurse would work closely with the personal support worker on shift.

Wettlaufer was placed at Telfer Place by Lifeguard HomeCare, which had trouble retaining nurses.

“A lot of them wouldn’t complete their orientation. They thought it was too much work,” Beauregard said.

“It seemed like by the time you were done your morning [medication] pass, you’re already into your noon med pass, then a smaller med pass in the afternoon and then you’d still have to do your charting. And then on nights it would be the physical work.”

Wettlaufer would have gotten eight hours of training as an agency nurse before she could work a night shift.

“After the eight hours of training the next night she would be asked to come in, she would now have the keys to the medication room, the medication cart, the narcotic bin, she would be the sole person of authority within Telfer Place, in charge of the whole building. And the only other person working with her would be a PSW,” said Liz Hewitt, a lawyer for the commission.

The resident’s blood sugar was low two days in a row as Beauregard came on for her night shift. Wettlaufer was working the evening shift. Both times Beauregard called 911. Paramedics treated Towler the first night and took her to hospital the second night.

“The doctor said he didn’t have any concerns,” Beauregard said.

She didn’t have any reason to suspect anyone was trying to harm the resident, she added.

Towler survived and is expected to testify. Wettlaufer was charged with trying to kill her.

Beauregard said she’s been thinking back on her time working with Wettlaufer, wondering if there were signs that she was harming residents.

“I look back now and I think, is there something that I missed? But there was nothing.”

Inquiry expected to last until fall

The Public Inquiry into the Safety and Security of Residents in the Long-Term Care Homes System was established on Aug. 1, 2017, after Wettlaufer was sentenced to eight concurrent life terms. It began hearings on June 5, and is examining how Wettlaufer’s crimes went undetected for so long.

Her killing spree began in 2007 and continued until 2016, when she finally confessed to a psychiatrist and a social worker. Until then, her employers, police and Ontario’s licensing body for nurses had no idea eight patients had been murdered and six more poisoned with injections of massive doses of insulin.

The inquiry is scheduled to last until September.