Canada’s first major peacekeeping deployment under the Trudeau Liberals will fall slightly short of its stated goal in terms of the participation of women, Defence Minister Harjit Sajjan says.

More female participation in the gritty, often dangerous work of rebuilding shattered nations is a signature ambition of both the UN Security Council and the Liberal government, which has gone to great lengths to promote what’s known as the Elsie Initiative.

The target, originally set by the world body, is intended to ensure that by 2020 women would make up 15 per cent of each military peacekeeping contingent.

The complement of women among Canadian aircrew and troops, which began deploying Sunday for a helicopter support mission in Mali, will be 14 per cent, Sajjan said in recent interview with CBC News.

He acknowledged it does not meet the target, but insisted that once other peacekeeping commitments make it to the field, including a proposed 200-soldier rapid reaction force, the numbers will improve.

“The Canadian Armed Forces have done their work of making sure that we have the right people,” he said.

It is anybody’s guess when the other so-called smart pledges outlined by the government last year will be delivered.

The UN, by its own admission, has failed miserably for a decade or more to boost the participation of women, both at the military and the civilian police peacekeeping level.

The latest statistics, current as of the end of May, show only four per cent of military missions are made up of women.

At its marquee, star-studded peacekeeping conference in Vancouver last fall, the Liberal government took pains to underscore how the presence of women in conflict zones and in uniform would go a long way to easing and perhaps even resolving conflicts.

Sajjan was eager to point to the wider necessity of development and diplomacy working in lockstep with the military.

“One thing we want to be clear, the military is not the only solution,” he said. “It’s part of a whole of government.”

Part of the exercise is also about setting a good example, the minister said.

“We want to make sure that Canadian leadership is there and highlighted,” Sajjan said. “It’s not just about male or female. it’s about having the right people.” 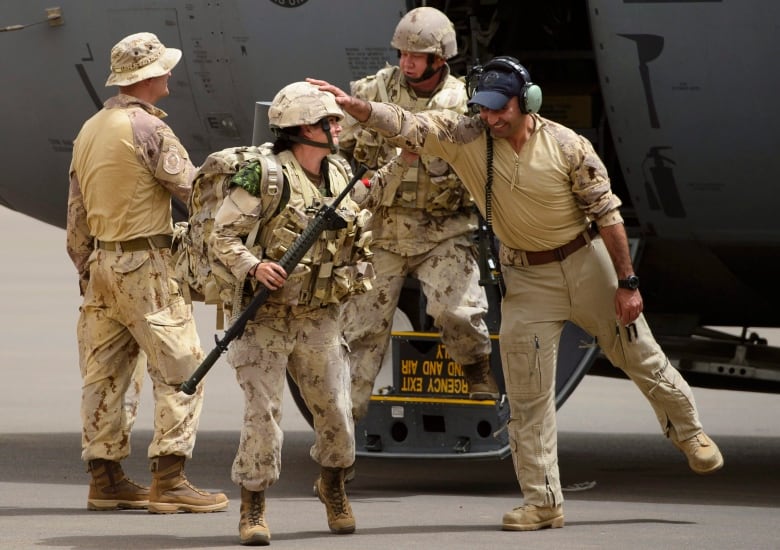 UN missions are made up of only four per cent female members, falling well below the UN’s goal of 15 per cent. (Sean Kilpatrick/Canadian Press)

Some critics have argued for months that the Liberal government’s smart pledge system, which emphasizes providing the UN with support, training, equipment and know-how over large commitments of ground troops, is bound to have a muted impact.

Peggy Mason, president of the Rideau Institute, an Ottawa-based non-profit independent research and advocacy group, said she did not want to downplay the Mali contribution, but overall Canada’s approach to renewed peacekeeping has been too piecemeal and too tepid.

“If we want to have a real impact on the number of women peacekeepers we have to lead by example, and that means we have to fully re-engage in peacekeeping,” she said Monday.

Meeting the demand for more female soldiers is something every troop-contributing nation struggles with, experts have often said.

Canada is no different

Recent figures released by National Defence show that women represent only 15 per cent of the Armed Forces, despite a high-profile effort to make a military career more attractive.

The statistics show that women, when they do join, opt for the air force and the navy, as well as university-level leadership training.

The army, which would provide the ground-level leadership in a conflict zone, struggles to convince women to sign up, according to the figures.

That is a problem, said Mason, who believes that putting large numbers of troops on the ground for more than a year at a time will inspire the public, including women.

“I actually think if Canada was really serious and really meaningfully engaged, starting with a three-year commitment,” she said, “that would actually be a way to attract more women to the army.”