The Trump administration’s crackdown on asylum seekers has renewed calls by critics to scrap or suspend the Canada-U.S. Safe Third Country Agreement (STCA); arguing that the U.S. is no longer a hospitable destination for refugee claimants.

But that raises the question about whether more asylum seekers would then come into Canada.

“The answer is that it’s speculative and no one knows,” said Peter Showler, former chair of the Immigration and Refugee Board (IRB) of Canada.

But, he adds: “I don’t think there’s a reasonable assumption that there would be a significant increase.”

Under the STCA, a person must make their refugee claim in the first, so-called “safe country” they reach. The premise of the deal was that since Canada and the U.S. share similar values, both are safe countries for those seeking refugee status.

It means those who first arrive in the U.S. and then seek entry to Canada to make a refugee claim will likely be turned back. (There are a few exceptions, for example, if the claimant has a family member in Canada.)

Yet thousands of asylum seekers have recently crossed into Canada thanks to a loophole in the STCA, which applies only to those who try to enter by train, at airports or at official land border crossings. It doesn’t apply if — as so many people have in Quebec, Manitoba and elsewhere — one just walks across the border at some unofficial, unguarded spot.

Some suggest that scrapping the STCA would lead to more asylum seekers coming to Canada, because, that way, they could go to any official port of entry without the risk of being sent back to the U.S. or facing, what can be at times, a dangerous journey to cross the border, depending on the season and terrain.

​Trump has taken a hard stand against illegal immigrants, referring to them as “invaders.” His administration was slammed for the controversial policy of separating children from parents arrested for crossing illegally from Mexico. And on Monday, he said those caught crossing illegally should be immediately sent back without appearing before a judge.

His stance has sparked calls from human rights activists, refugee lawyers and Canadian politicians to scrap the STCA.

But Showler says there are approximately 11 million to 12 million illegal residents in the U.S. Many are fully aware of the relatively easy irregular or illegal ways to enter Canada, he said.

Yet despite Trump’s crackdown, there have not been huge increases of people crossing the border illegally, he said.

“That could have triggered a large movement toward Canada and it didn’t,” Showler said.

Many have established roots in the U.S., have been there for decades, have families, driver’s licences and Social Security cards and aren’t likely to come into Canada just because it would be easy, he said. 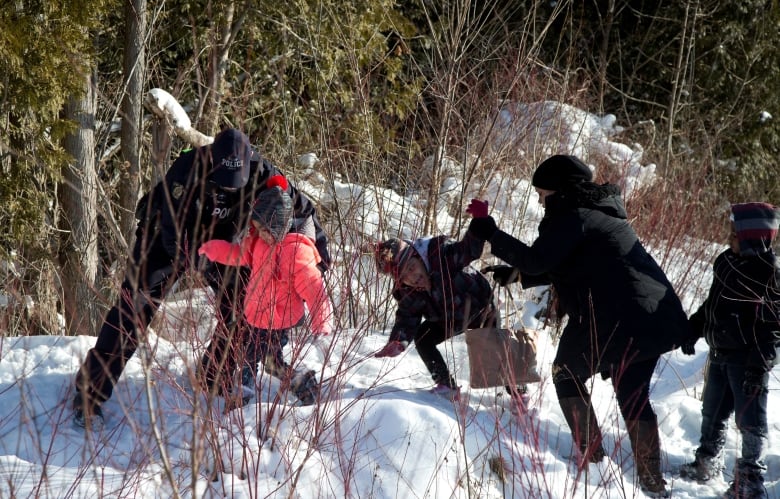 RCMP officers assist a family as they walk across the U.S.-Canada border. Such crossings are not covered by the Safe Third Country Agreement. (Christinne Muschi/Reuters)

In a report released last year, Fleeing to Canada on Foot: Reviewing the Canada-U.S. Safe Third Country Agreement, program associate Benn Proctor of the Canada Institute of the Wilson Centre, a global affairs think tank, ​noted that the agreement has “significantly reduced” the costs to Canada from processing claimants by dissuading applicants to come to Canada.

The OECD estimates a cost of $14,000 per asylum seeker, meaning the STCA may have reduced Canadian spending on asylum seekers by $2 billion over a 10-year period, he wrote.

(Those are first-year, or start-up costs only, he noted, and very quickly drop to near zero once refugees develop language skills and job placements.) 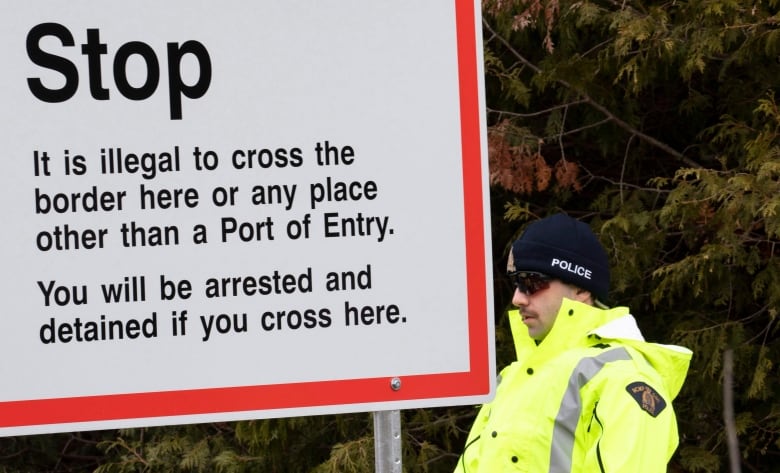 An RCMP officer stands guard at the border leading into Canada from the U.S. near Champlain, N.Y., on April 18. (Paul Chiasson/Canadian Press)

Since his report, however, Proctor said he has revised his thinking that there would be a huge influx of asylum seekers coming to Canada if the STCA was scrapped.

He said he now takes into account that — with the spread of information about safer places to cross the border illegally — it has become much easier to cross at these unofficial spots.

He expects a “moderate noticeable uptick” in the number of asylum claims if the STCA were scrapped.

“I would still say you expect to see more asylum claims coming from the U.S. if the Safe Third Country Agreement was disbanded or suspended. But originally I thought you would expect to see a lot more.”The increase of asylum claims would put more pressure on resources and exacerbate the problems with backlogs, he said.

Anna Pape, a spokeswoman for the IRB, said in an email that changes to the global environment have led to a “steady and significant increase in refugee claim referrals over the last few years” and resulted in a “growing backlog.”

As of April 30, 2018, there were more than 55,000 pending cases, and the projected wait time for claims for refugee protection before the board has increased to approximately 20 months, Pape said.

2018-06-26
Previous Post: Stimulus Survey2
Next Post: Minister under fire over handling of RCMP harassment amid $1.1B lawsuit