More than half a million prescriptions drugs are stolen from pharmacies each year, with the majority being highly addictive opioid painkillers that end up on the street, according to an analysis of Health Canada data by CBC News.

The analysis found that overall, 1.8 million doses of controlled drugs were reported missing to Health Canada in the first nine months of 2017, a 64 per cent increase from 2012, when 1.1 million doses went missing.

A majority of the nearly nine million doses that were stolen or unaccounted for over those five years were highly addictive opioid painkillers, such as oxycodone, hydromorphone and codeine. In about one-third of the cases, there was no explanation for how they went missing. 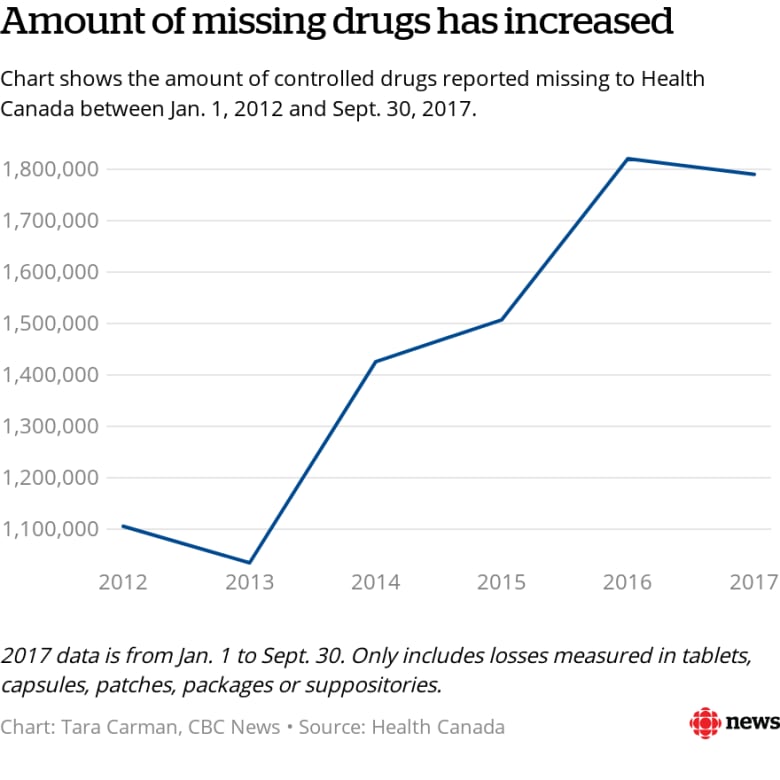 Some of the missing drugs inevitably end up on the black market, where they are in high demand by those addicted to opioids who can’t get them by prescription.

This is almost certainly the case for the more than 500,000 pills or patches stolen each year, authorities say.

A crushable form of oxycodone can fetch between $40 and $80 on the street, according to Det.-Const. Chris Auger, who works with the drug enforcement unit of the Ontario Provincial Police. 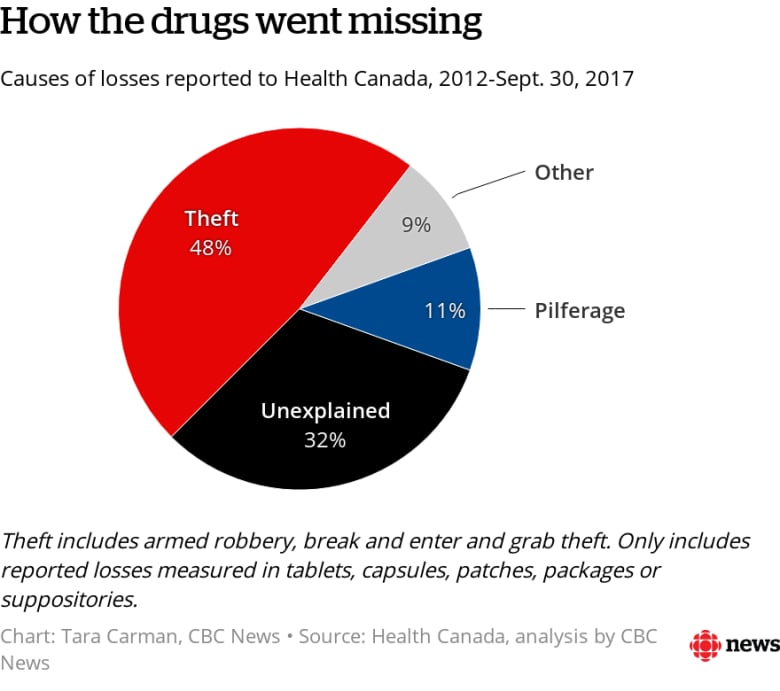 The value usually climbs higher outside the big cities. A fentanyl patch, which can be cut into multiple smaller doses, might fetch $250 in downtown Toronto but $400 in Sarnia, Ont., Auger said.

Opioids are also sometimes used as a street currency, which also increases their value, Auger said.

Ontario’s pharmacies saw the most significant increase in losses, especially due to theft, in recent years. 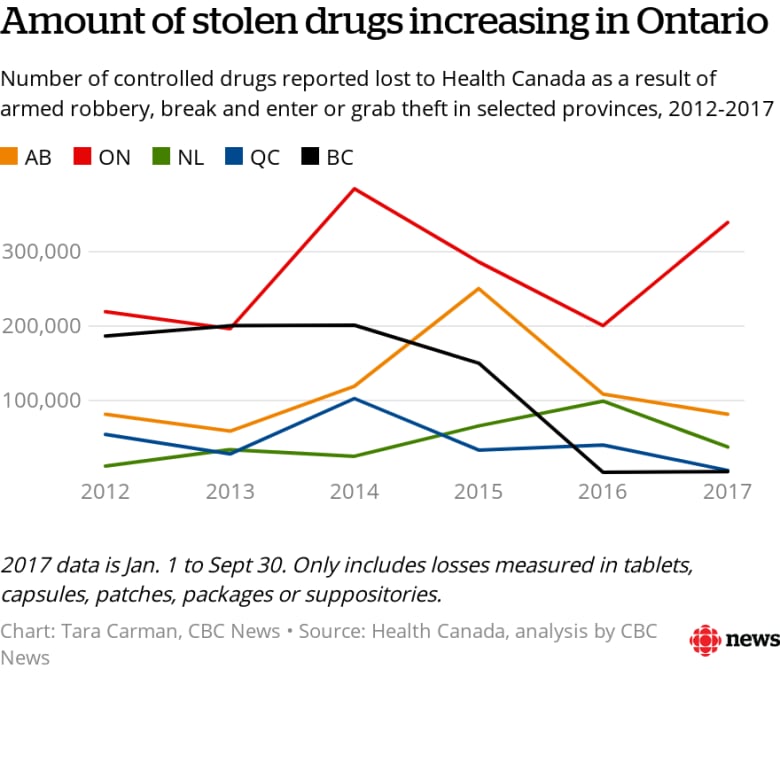 Fady Fares has had two of his Ontario pharmacies robbed.

“It’s one of the things that pharmacists deal with on almost a daily basis. It’s either a break-in after pharmacies close, or sometimes while they’re working and dispensing,” he said.

“If you have someone holding a gun and saying, ‘I need those narcotics,’ we always say, don’t even argue; just give them what they want. You’re not going to lose your life over this issue, right?”

CBC’s Vik Adhopia expains what might be going on:

Every year, hundreds of thousands of controlled drugs (mostly opioids) that were supposed to end up on pharmacy shelves are reported missing to Health Canada — and that number is on the rise. Vik Adhopia explains what might be going on. 1:48

Health Canada began inspecting pharmacies in 2015 to make sure drug loss reporting rules are being followed. Security-related problems were the most common violations noted by inspectors in 2016-17, according to the program’s annual report.

“Most observations were of a minor or non-critical nature,” the report states. “However, in some cases, inspectors found that controlled substances were stored in unsecured locations, meaning that the potential for diversion was higher.”

Health Canada declined an interview request but attributed the increase in reported losses to the agency’s stepped-up inspections, which started in 2015.

Pharmacies have become better informed of their obligation to report losses and are therefore reporting more of them, spokesperson Maryse Durette said in an emailed statement.

Every time controlled drugs go missing from a pharmacy, hospital, transport company or other facility, details about the loss must be reported to Health Canada within 10 days.

CBC News obtained all loss reports across Canada between Jan. 1, 2012 and Sept. 30, 2017 through an access-to-information request. Over that time period, there were 142,420 individual reports filed with Health Canada.

CBC News limited its analysis to losses measured in capsules, tablets, patches, packages or suppositories, with each counted as one unit reported lost. Together, these accounted for 93 per cent of the loss reports.

The Health Canada figures only include losses that have been discovered and reported, meaning they likely significantly understate the amount of controlled drugs diverted from pharmacies and hospitals.

Legitimate prescriptions sold for profit, for example, or opioids obtained using forged or stolen documents would not be reported to Health Canada as lost. 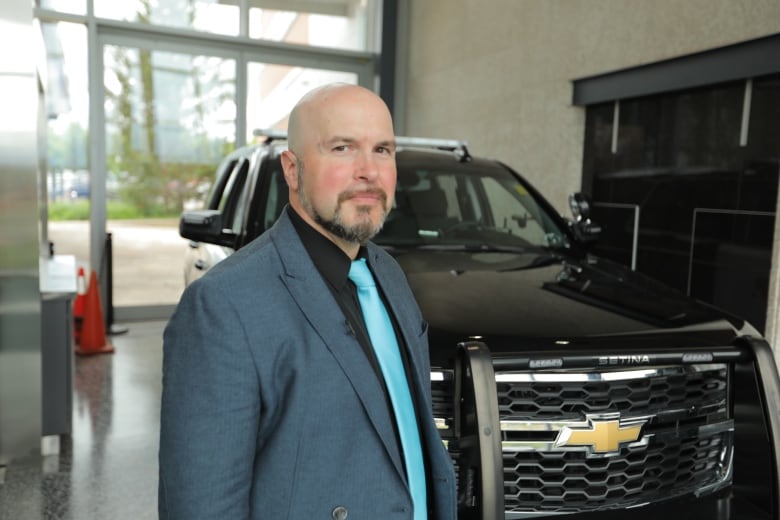 Det. Chris Auger, who works with the Drug Enforcement Unit of the Ontario Provincial Police, said the value of stolen prescription drugs is higher outside the big cities. (John Badcock/CBC News)

Auger also said there are holes in the system that allow pharmacy employees to divert controlled drugs relatively easily — either for their own personal use or for resale.

He pointed to the example of unused drugs returned to pharmacies by the public.

“You’re of the good faith that that person is going to … make sure it’s been disposed of properly, instead of going … ‘Thank you, sir, for your mother’s hydromorphone, and I’m going to place it in my pocket as you turn around’ because nobody’s really accurately accounted for that.”

Pharmacists who are caught diverting drugs are most often disciplined by their provincial pharmacy colleges. It is difficult to know how often this happens, however, because some colleges — including those in Ontario and B.C. — do not include the nature of such offences in their public disciplinary decisions. 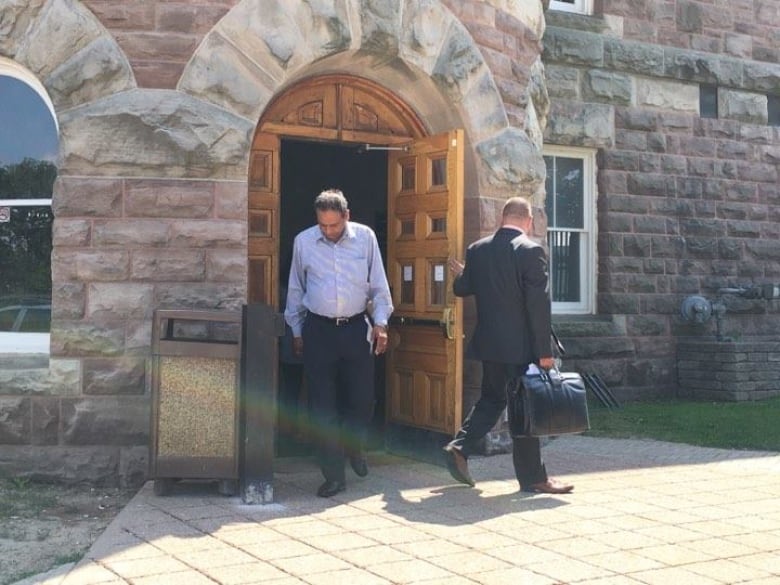 In more egregious cases, however, there are criminal convictions.

Pharmacist Yogesh Patel, of Woodstock, Ont., was sentenced to 10 years in jail last year for stealing thousands of fentanyl and hydromorphone patches with a street value of about $1 million.

In Ottawa, pharmacist Waseem Shaheen faked a robbery at his own pharmacy in 2014 to cover up an elaborate fentanyl trafficking ring, leading to a 14-year prison sentence.

But such cases are the exception rather than the rule, said Fares, and the vast majority of pharmacists take their duty to protect the public seriously.

New software in some Ontario pharmacies that automatically reconciles the amount of drugs in stock with what’s been ordered has made it considerably easier to track what happens to drugs, Fares said.

Even so, a rapidly rising number of controlled drugs are reported missing each year for unknown reasons.

“It could be that the bottle that they ordered from the manufacturer was short a pill or two, and then, when you’re doing such high volumes of narcotics, it may add up,” said Mina Tadrous, a researcher with the Ontario Drug Policy Research Network. 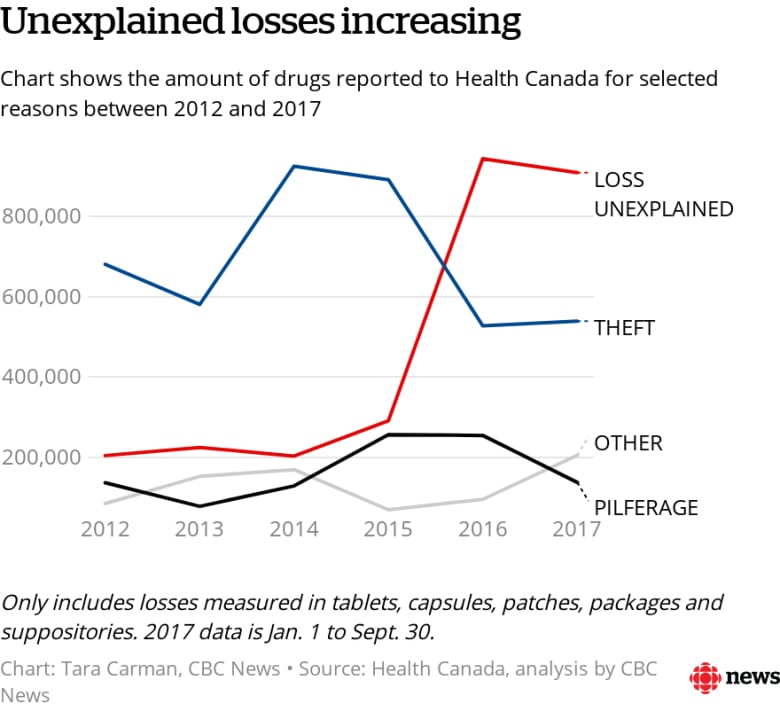 Some of the losses classified as unexplained also turn out to be inventory errors or pilferage on the part of pharmacy or hospital employees that was never proven so couldn’t officially be classified as such.

The largest single loss in the Health Canada data was 166,000 oxycodone tablets, along with smaller amounts of other drugs, from a Shoppers Drug Mart in Surrey, B.C., in 2016.

“This was attributed to the registrant, Mr. [Steven] Lum, who was also the pharmacy manager, having poor management of the narcotics inventory,” Gillian Vrooman, a spokesperson for the College of Pharmacists of British Columbia, said in a statement.

The loss was discovered when the amount of drugs in the computer was determined to be significantly higher than what was present in the pharmacy, she said. “The pharmacy manager could not explain the discrepancy and it is therefore assumed that these drugs were illegally diverted.”

Lum was suspended by the College for one year and ordered to pay a $30,000 fine. He is now eligible for reinstatement, but is not currently permitted to own or manage a pharmacy.