By: Major News Channel
In: News, Sports/Baseball/MLB
With: 0 Comments

Toronto’s Randal Grichuk put on a show for hundreds of friends and family that made the trek up to Houston to see him play just his third career game at a ballpark only about 35 miles from his hometown of Rosenberg, Texas.

Grichuk hit a two-run homer and made a huge defensive play, helping the Blue Jays beat the Houston Astros 6-3 on Monday.

“You can’t feel your body all game,” Grichuk said. “You feel like you don’t need to stretch or get loose. It’s just as special for me as I know it is for my family.”

Toronto also got two homers from Curtis Granderson against Justin Verlander, but the night belonged to Grichuk in one special homecoming.

His soaring 471-foot home run, which clanged off the light pole above the train tracks on the left-field wall, came against Will Harris and made it 6-3 with two out in the eighth.

Grichuk then reached over the short wall in right field to rob George Springer of a homer with two on and no outs in the ninth.

“Those are the plays you dream of that you don’t really get too often,” he said. “But exactly what you hope for happened.”

Grichuk, who moved from center to right field in the bottom of the ninth, had his back to the wall when he reached between two fans with gloves to make the grab.

Springer stopped running and bent down in disbelief when he realized Grichuk had robbed him.

Granderson’s leadoff shot in the fifth tied it at 3. He connected again with two out in the seventh, belting an opposite-field drive off Verlander (9-3) into the second row in the Crawford Boxes in left field.

“I’m not a huge fan of the Crawford Boxes right now,” Verlander said. “The one to right, I thought Curtis got pretty good. The one to left, I didn’t think he got that one very good. But it’s the ballpark we play in. It’s fair for all sides. I need to do a little bit better job.” 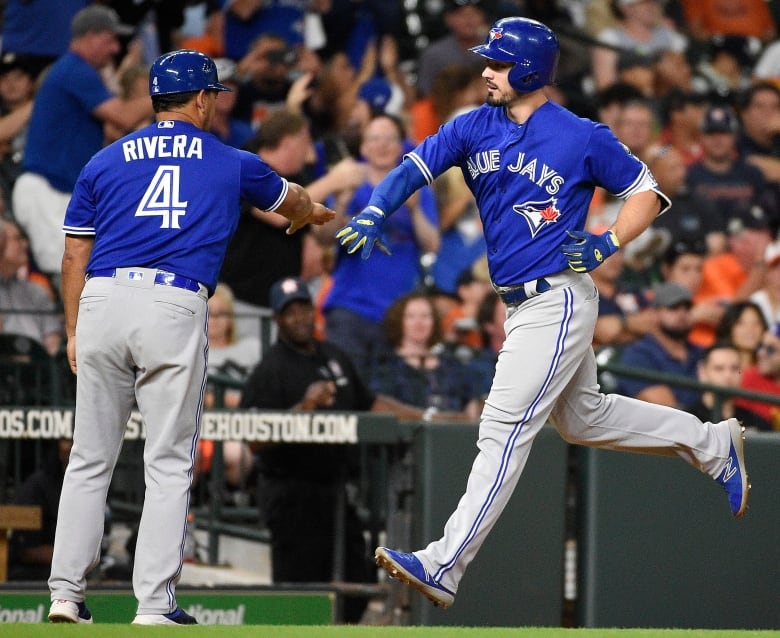 Verlander, who entered with a major league-best 1.60 ERA, allowed four runs and seven hits — both season highs — in 6 2/3 innings. He struck out six and walked two in his first loss since May 11.

Toronto’s J.A. Happ (10-3) yielded three runs and seven hits in six innings in his sixth straight win. Seung-hwan Oh worked the ninth for his second save.

Former Astro Teoscar Hernandez, who received his World Series ring in a pregame ceremony, had three hits and Justin Smoak drove in two runs as the Blue Jays won their third straight.

Alex Bregman homered in the Astros’ third loss in 18 games.

Hernandez singled with one out in the first before Yangervis Solarte drew a walk. Smoak’s two-out double lifted Toronto to a 2-0 lead.

Yuli Gurriel singled in Jose Altuve in the bottom half, and Bregman’s drive to the seats in left tied it at 2 with one out in the third.

Bregman also singled in Jake Marisnick in the fourth, but the Blue Jays tied it up again when Granderson sent the third pitch of the fifth inning into the stands in right for his eighth homer this season.