With only days to go before China and the United States trigger punishing tariff penalties on one another’s exports, it seems impossible to imagine either country backing down.

As both sides talk tough, once again global markets, including in Shanghai, New York and Toronto, declined sharply.

On Sunday, China had announced its latest weapon in its economic battle with the U.S., namely 700 billion yuan ($142 billion Cdn) in new stimulus for domestic industries.

Markets knew Beijing was planning to make new money available to help its companies cope with the U.S. trade restrictions. But the newly announced dollop of liquidity was larger than expected. In anticipation, the Chinese currency slid further against the U.S. dollar.

Scheduled to kick in the day before the countries apply their tit-for-tat tariffs on July 6, the measures show China is preparing its economy to withstand the U.S. trade attack, says Gordon Houlden, director of the University of Alberta’s China Institute. 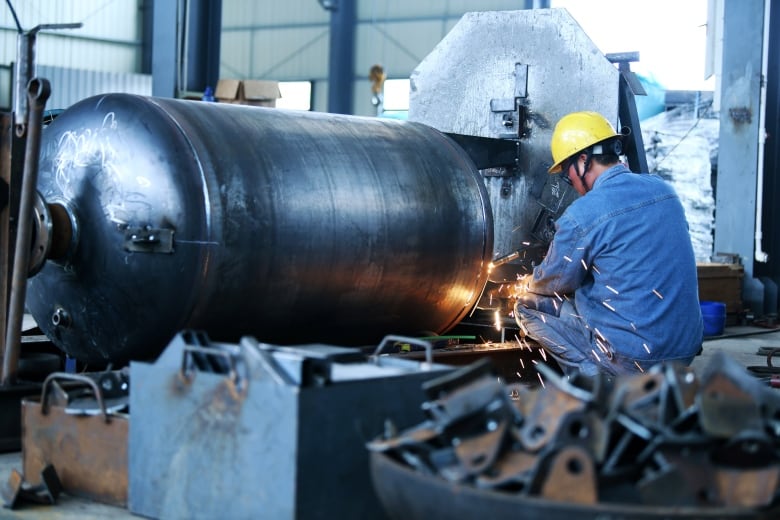 China has opened the door to new lending to help small and large companies survive the adjustment to U.S. tariffs. (Reuters)

“Many people say ‘Well they don’t have to worry about politics because they’re the Communist party and they’re unelected,'” says Houlden, “Of course there’s some truth to that, but public opinion does matter for them as well, and I think the government, or the regime if you wish, is under pressure to stand up for its own interest and the interests of China.”

On the U.S. side, after his recent climb-down on separating immigrant families, U.S. President Donald Trump is unlikely to want to be seen caving to China in advance of the U.S. midterm elections.

In fact there were early reports yesterday that Trump was upping his attack on China by restricting that country’s investments in U.S. technology companies to prevent them from stealing secrets. But by mid-morning it appeared Treasury Secretary Steve Mnuchin was walking that back.

Calling stories from two of the world’s most reliable and prudent business news sources, the Wall Street Journal and Bloomberg, “fake news,” Mnuchin tweeted that they had got the wrong end of the stick. The restrictions, he wrote, applied not just to China “but to all countries that are trying to steal our technology.”

Later as U.S. markets fell, trade adviser Peter Navarro played it back even further, saying there were no plans for restrictions on Chinese investment. It was the kind of confusing narrative investors have come to expect from the Trump administration.

Houlden, who just returned from a week in the U.S. capital monitoring political reaction there, says it appears the trade war threat is getting worse.

“There is damage being done,” he says.

Certainly China’s stock markets are feeling the effect, with the Shanghai index now down nearly 20 per cent from recent highs, what analysts usually call a bear market. Some stocks fell 10 per cent in a single day.

But U.S. stocks were also affected, partly because one of the targets of overseas tariffs, U.S. motorcycle maker Harley Davidson, announced it was moving some jobs abroad. According to the Trump’s “make America great” script that wasn’t supposed to be the way it happened.

Even after the confusing series of corrections from White House officials, U.S. tech stocks were down sharply, with the NASDAQ off about two per cent on the day.
Houlden says he’s afraid the growing animosity between the two sides may not be something easily patched up after the midterms are over. 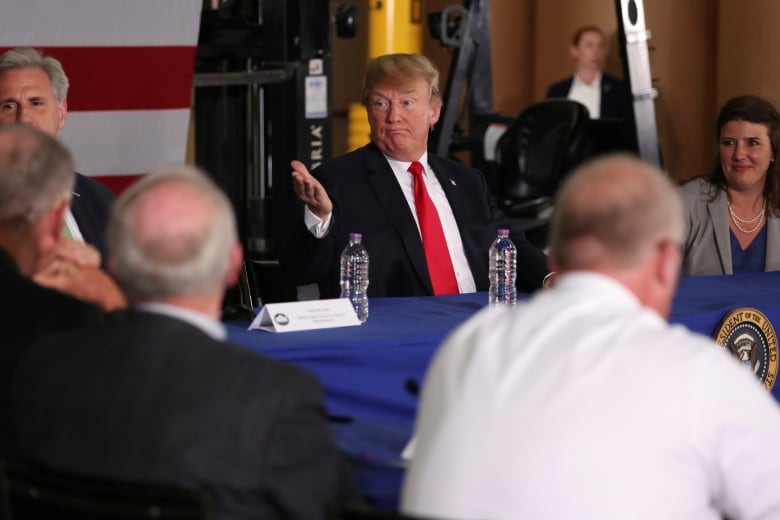 U.S. President Donald Trump participates in a roundtable discussion about trade in Duluth, Minnesota, last week. There is a lot of anti-China feeling in Washington, says Gordon Houlden of the University of Alberta’s China Institute. (Jonathan Ernst/Reuters)

“I think there’s still lots of negativity out there,” he says. “There’s a bedrock — I felt in Washington — of anti-China feeling.”

Like many others, Houlden doesn’t see an immediate easy fix.

“On the other hand, the capacity to do damage to each other is so great that there has be be a rationality that will appear at some point.”

Whether or not Trump’s tweet-led policy can be described as rational, Greg Chin, a China scholar at Toronto’s York University, says it appears China is trying to be.

“A far as I can read it, the Chinese haven’t really gone for the jugular yet,” says Chin, who is currently working on a book about the internationalization of the Chinese currency.

While Trump always quotes trade in physical goods, he fails to mention the huge value of goods and services sold to the Chinese by U.S. companies operating in China. As the trade war heats up, Chinese consumers could show their displeasure by cutting back on those purchases, doing significant damage to U.S.-listed companies.

There are many other things China could do, but so far Beijing has shown restraint, and Chin is convinced that, unlike many other countries, including the U.S. and Canada, China has a long-term plan worked out.

“The Chinese have actually had a lot of time to think about this,” he says. They listened to “the noises” Trump was making during his campaign.

“And knowing China, they’ve been strategizing for a while. How do we deal with this guy and how do we roll this stuff out? And how do we not over-react when he’s over-reacting?”

China holds a large chunk of the U.S. government’s long-term debt, more than $1 trillion US.

It has an enormous and growing domestic economy. By some measures it is already bigger than the U.S. As former Goldman Sachs banker Jim O’Neill recently stated, China creates an Italy every two years.

It has depended on the U.S. for a lot of that growth. But now U.S. protectionism is adding pressure to look for new suppliers and new markets.

2018-06-26
Previous Post: Canadians head into fight that may be ‘unwinnable’ in Mali
Next Post: Morneau under pressure to match Trump’s tax cut as finance ministers meet