An elephant named Rex, dozens of crocodiles and enough eel meat to fill a swimming pool.

That unusual list is just a small sampling of what Canadian officials have seized over the past decade while investigating illegal attempts to smuggle animals and animal products in or out of the country.

While the annual numbers on the black market animal trade in Canada generally have been trending downward, this year is already looking like a boom year for seizures of live animals and animal parts at the border, according to documents obtained by CBC News under access to information law.

Since 2011, more than 4,000 animals and animal parts have been seized by the government, which has been averaging about 330 separate seizures per year. About two-thirds of these cases involved confiscation of live animals.

As of early April of this year, officials already had seized over 100 animals and animal parts since the beginning of the year — well before the start of the summer season, when the rate of seizures tends to go up.

Many of the animals stopped at border crossings are animals for which owners don’t have proper permits. We’re not talking about cats and dogs, either: the wildlife enforcement team at Environment and Climate Change Canada (ECCC) has seized serval cats — a wild feline species native to Africa — wild Asian donkeys and pythons over the past ten years — not to mention a wide variety exotic animal parts.

Several recent high-profile busts drew new attention to animal smuggling in Canada. In 2014, a man attempted to cross the border from Michigan with 51 live turtles taped to his body.

“Wildlife crimes have just skyrocketed in the last 10 to 15 years,” said Sheldon Jordan, the director general of ECCC’s wildlife enforcement division. He said his department has shifted more resources to the seizures team in anticipation of an unusually busy year. 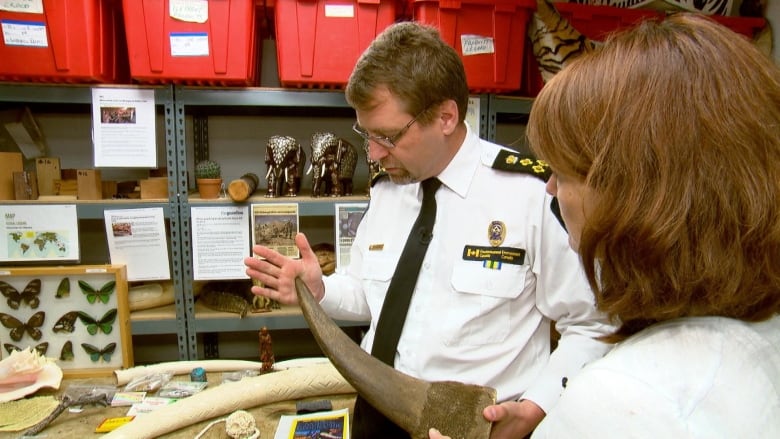 There’s big money to be made in the black market animal trade.The price of a dead polar bear, for example, has quintupled in the last 10 years, from $5,000 to $25,000 CAD — and Canada is the only country that allows trade in polar bears.

It’s difficult to establish the precise scope of the black market animal trade, but the World Wildlife Fund calls it the fourth largest illegal market in the world, worth roughly $205 billion CAD each year.

Jordan said the lucrative nature of the trade puts endangered species at risk.

“When it gets out of control … they’re just getting decimated,” he lamented.

The summer months always see a spike in animal smuggling, Jordan said. As the weather warms, smugglers will often ship smaller animals in packages through regular mail. Many don’t survive the trip.

“For a lot of these animals, proper transport is paramount because it is already a stressful exercise … when you talk about smuggling, the idea is to bring the animal in undetected,” he said. “The welfare of the animal is not the primary concern.”

Animals that do survive the trip often haven’t been properly vaccinated, which threatens other animals and pets in Canada, he added.

A Vancouver man boarding a flight to China was found carrying three bear paws in his carry-on luggage, the CBC’s Belle Puri reports 2:04

While the Canadian Border Services Agency (CBSA) is responsible for protecting the border, it doesn’t intervene in cases of animal seizures. Instead, they refer the incidents on to Jordan and his team.

That branch is responsible for protecting plant and animal species native to Canada, and for regulating foreign species trade.

Between 2016 and 2017, ECCC conducted over 3,500 wildlife and forestry smuggling investigations and participated in court proceedings that led to 152 criminal convictions.

When animal parts are seized, ECCC keeps them as evidence for as long as it takes to press charges and complete a trial. After that, most of the items are destroyed, with a few specimens kept for training purposes.

Live animals usually are placed with zoos or caretakers. Rex the elephant, who was seized by border officials at a land crossing about ten years ago, is now living out his days in a zoo in Oklahoma.

Jordan said that most of the animals smuggled into Canada are intended for the pet trade. The dead animals are mostly for decor, and animal parts are usually used in food or traditional medicine.

One seizure that stands out in his mind happened in 2007, when ECCC officials intercepted 27 tonnes of conch meat, worth millions. A biologist they consulted after the operation estimated that seizure amounted to 10 per cent of the entire global population of that particular endangered conch species.

Many of animals seized are reptiles; turtles are especially common. Sue Carstairs, executive director of the Ontario Turtle Conservation Centre, said that’s because they’re easy to conceal and transport.

Over the past few years, she said, the number of endangered turtles alive in Canada has been “greatly reduced” by poaching.

“It has a dramatic effect on the population.”

Canadian law states it’s illegal to import any wildlife obtained illegally in another country — and any animal imported, alive or dead, must be accompanied by the proper permits to enter or exit the country.

Breaking the law can invite a fine of up to $1 million and/or five years in prison.

Last week, ECCC announced the results of a special investigation — Operation Thunderstorm — it conducted in conjunction with Interpol and 91 other countries.

The month-long operation seized more than 1,200 pounds of ivory, 43 tonnes of meat (including bear, elephant, crocodile and zebra) and more than 30,000 live animals.

The world of animal smuggling is “evolving,” Jordan said. Smugglers are branching out from core markets — like poached elephant ivory — into other exotic species. They’re finding new ways to get the animals across the border, such as the postal service. International organized crime has gotten involved, attracted by the massive profits to be made.

McCann said increasing awareness and stricter regulations are helping to deter smugglers, but more can be done.

He offered a few tips. Before purchasing a pet, he said, Canadians need to be asking “the right questions [and] expecting certain requirements like vaccinations and health certificates signed by a veterinarian.”

Jordan agreed, pointing out that people need to be better informed about where their food and pets come from. He said, if Canadians were more aware of how animals and animal parts come to Canada, they’d help to reduce the illegal trade in wildlife.

2018-06-26
Previous Post: Trade committee returns to Ottawa to talk about the pain of Trump tariffs
Next Post: Harley-Davidson shifts some production overseas as EU tariff of $2,200 per bike kicks in