Anatomy of a blunder: How Veterans Affairs quietly buried a $165M accounting error

It was an incredibly simple (and incredibly daft) mistake — and it led to a $165 million federal fiscal faux-pas.

In 2001, the Liberal government of Prime Minister Jean Chrétien made what appeared to be an innocuous change to federal tax forms.

It separated federal and provincial tax exemptions, shuffling the basic personal tax credit from one part of the document to another.

Staff at Veterans Affairs, who administer disability awards and pensions, did not pick up on the modification to the tax law for several years and ended up short-changing former soldiers — most of them elderly — who received disability pensions and awards benefits.

It was a mistake that cascaded, over time, into a whopping, multi-million dollar fiscal mess that Justin Trudeau’s Liberal government began to mop up last fall.

CBC News has obtained hundreds pages of documents under access to information legislation, and has conducted a series of background interviews with current and former federal officials, to understand the extraordinary blunder that shortchanged up to 272,000 disabled veterans of roughly $165 million.

The documents show how officials traced the confusion back to the change in the forms and in the Income Tax Act.

More troubling is the fact that the error was discovered and quietly fixed by Veterans Affairs in 2010 — but no effort was made to notify or reimburse those affected by it.

For critics, the records obtained by CBC News raise important questions about fiscal accountability at Veterans Affairs. What actions did bureaucrats take when the error was first discovered? Why it was kept hidden until the former veterans ombudsman blew the whistle internally in 2017?

A significant number of the affected veterans — 170,000 — have since passed away. While the Liberal government has pledged to repay their estates, the documents reveal that Veterans Affairs does not keep track of next-of-kin and has no means of finding them.

No one was held accountable for covering up the mistake and the Liberal government has shown no interest in conducting a follow-up investigation to get to the bottom of the matter. 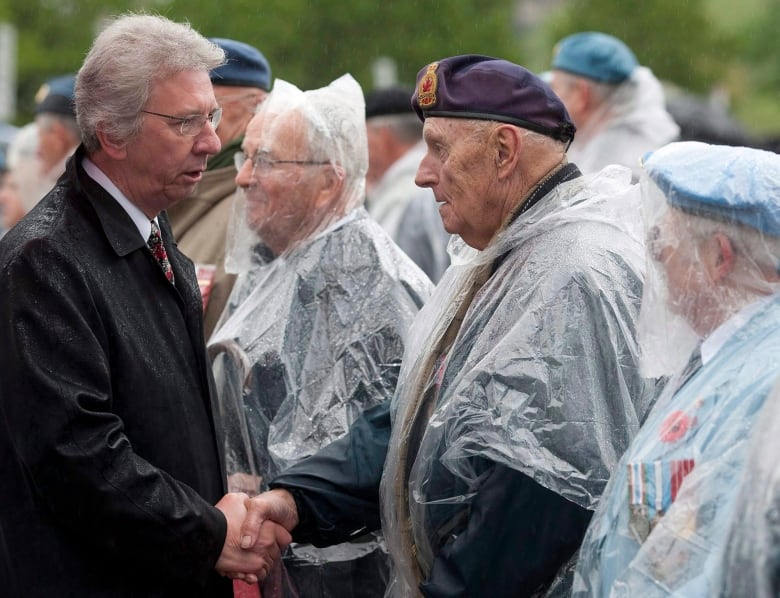 Jean-Pierre Blackburn shakes hands with veteran Bruce Bullock, 87, in Ottawa on Saturday, May 8, 2010. Blackburn was Veterans Affairs minister when the department corrected an accounting error that cost veterans roughly $165 million – without attempting to compensate those affected. (Pawel Dwulit/The Canadian Press)

A spokesman for Veterans Affairs Minister Seamus O’Regan ducked questions about who made the decision to cover up the error, and why.

“While I cannot speak about the decision-making processes of the previous government, it would be hard to believe a decision regarding the financial benefits of Canada’s Veterans would have been made without the Minister’s awareness,” said Alex Wellstead, a spokesman O’Regan.

“What I do know is that when this was brought to our government’s attention, we fixed it.”

The minister at the time was Conservative Jean-Pierre Blackburn.

He was unavailable when contacted CBC News.

Another former Conservative veterans minister, Erin O’Toole, said he believes there should be an investigation and described the decision to bury the mistake as an ethical lapse.

“This appears to be a fundamental breakdown of proper practices in a major department of the government,” he said.

“I believe we would support the government on some sort of investigation into this to see if there’s a cultural issue here. If someone elevated it to the political level on our watch and we didn’t fix it, that is a mistake.”

The briefings, slide deck presentations, letters, evaluations and actuarial projections offer a sketch of how the embarrassment unfolded and proceeded unchecked at the department level for the better part of eight years.

Starting in 2002, Veterans Affairs did not take into account the impact of the basic provincial tax credit on veterans.

The flawed method used to calculate disability pensions and awards “was never really questioned until about 2011,” says an undated federal government analysis.

The department insisted recently in a statement to CBC News that it “consistently applied the formulas correctly” and blamed the tax changes themselves for the error.

According to the documents obtained by CBC News, Veterans officials at the time appeared to be operating on the assumption that they had the law on their side because the legislation was “silent” on the precise method of conducting the calculations.

The “Pension Act does not specify the calculation for the annual adjustment,” said a December 2018 slide deck presentation.

The law may not be precise, but the documents show — under the heading of “new information” — that the regulations supporting the legislation do spell out the proper method for calculating the adjustment.

Internally, it seems, officials were trying to gloss over the mistake by downplaying its significance and making it appear — in one of the more recent briefings — as a proactive, positive measure:

“In 2011, [Veterans Affairs Canada] implemented a prospective change to the calculation of Disability Pensions and Disability Awards which was to the benefit of the veteran.”

A number of troubling questions need to be put to current and former Veterans Affairs officials now, said O’Toole.

“Did the age — and in some cases, the relatively small amounts — lead someone to make the wrong decision from an ethical standpoint? That is what we should investigate,” he said.

“That is perhaps one of the most troubling connections we might draw from this. I sincerely hope that was not the determination made by someone.”

In the documents, Veterans Affairs defended its financial practices and said it “employs a rigorous process whereby all escalation calculations are completed by the Statistics Directorate and validated by the Attestation Unit. [The] review and sign off is completed by various directors up to and including the director general of finance.”

It’s not clear whether anyone in those positions was held accountable when the error was discovered.

A history of program gaffes

Retired lieutenant-general Walter Semianiw, a former senior official at Veterans Affairs, said he’s not surprised that the blunder happened in the first place. He also questioned the meticulous fiscal image the department has tried to present in the documents.

During his three years there, Semianiw said, department officials were called on the carpet regularly by the federal Treasury Board for being unable to accurately cost programs.

“Every time we developed a new policy based upon direction from government, gave it to corporate services to figure out the dollars, had it ready in a Treasury Board submission … to be fair, not all of them, but enough of them came back from Treasury Board, saying, ‘Your numbers are wrong,'” he said.

“When I was there, this seemed to be a challenge for the department’s corporate services area to be able to determine the correct financial make-up for any type of new program.”